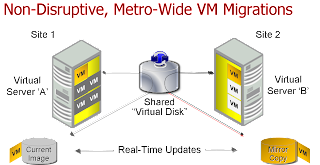 Whilst recently on site at a large NHS Customer in the North of England, I gave some serious thought to the process of migrations from physical to virtual storage from an existing physical environment and the ramifications in the case of physical disk failure.

It occured to me that if you utilised VMWare’s Storage VMotion and DataCore’s High-Avaliability [HA] offering, it was possible to do a seamless, on the fly data migration from physical storage into a DataCore virtual volume, whilst remaining protected from physical disk failure at the destination.

It is often said that the most common time for a disk drive to fail is within 2 hours of being booted for the first time, and whilst 99% of us perform rigorous soak testing beforehand, there is still a chance that a disk will fail mid-migration and severely delay a project at the very least. At the very worst, it can potentially corrupt the data being transferred leading to a full recovery scenario.

If physical failure of the destination occured in this DataCore scenario, then the destination volume would merely switch over to it’s highly available partner and the migration would continue seamlessly. A large reassurance in the case of this customer, whilst migrating mission critical, real time data in a 24-Hour environment.