“There is only one viable software SAN virtualization product available today and that is SANsymphony-V.”

“What about convergence, virtual storage appliances, flash-accelerated servers, and the cloud? DataCore will tweak, tune, optimise and develop SANsymphony to take account of them all and deliver what it has been focused on all along; a virtualized pool of SAN storage delivering data to servers in a fast and protected manner.”

Why is DataCore the only dedicated software SAN virtualisation vendor left standing? The answer lies in a skewed revenue geographic model, staff majority ownership of the company and a fair amount of luck.

It’s also down to a solid product, though other companies with great products have failed where DataCore did not. 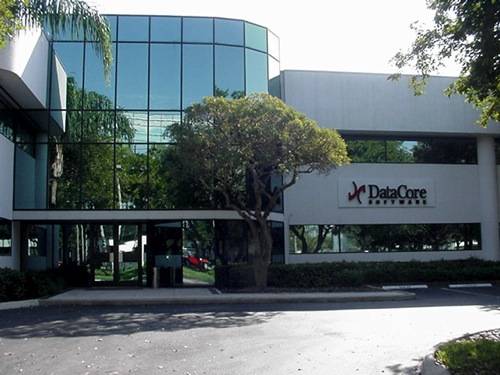 DataCore was founded in 1998 with the realisation that a SAN disk drive array was, or could be, an X86 server running drive array controller code, using its attached storage and presenting as virtual disks of networked, block-access storage. Customers could buy standard servers, provision them with commodity disk drives, and so have freedom of choice rather than being restricted to storage array manufacturers’ disk drive prices, often quite high, software licensing and functionality. They can also buy external storage arrays and have DataCore’s SANsymphony software control them too. Thus DataCore helped pioneer the SAN virtualisation appliance idea.

SANsymphony, a storage hypervisor as DataCore views it, and its associated products support a variety of server operating systems and hypervisors, and provide modern SAN array features such as virtualisation, high-availability and thin provisioning. It can run in a dedicated server or as a virtual machine and there are more than 6,000 DataCore customers with more than 20,000 software licenses bought.

Why is DataCore the last man standing?

Firstly, the product is good; it does what it says it does on the box…