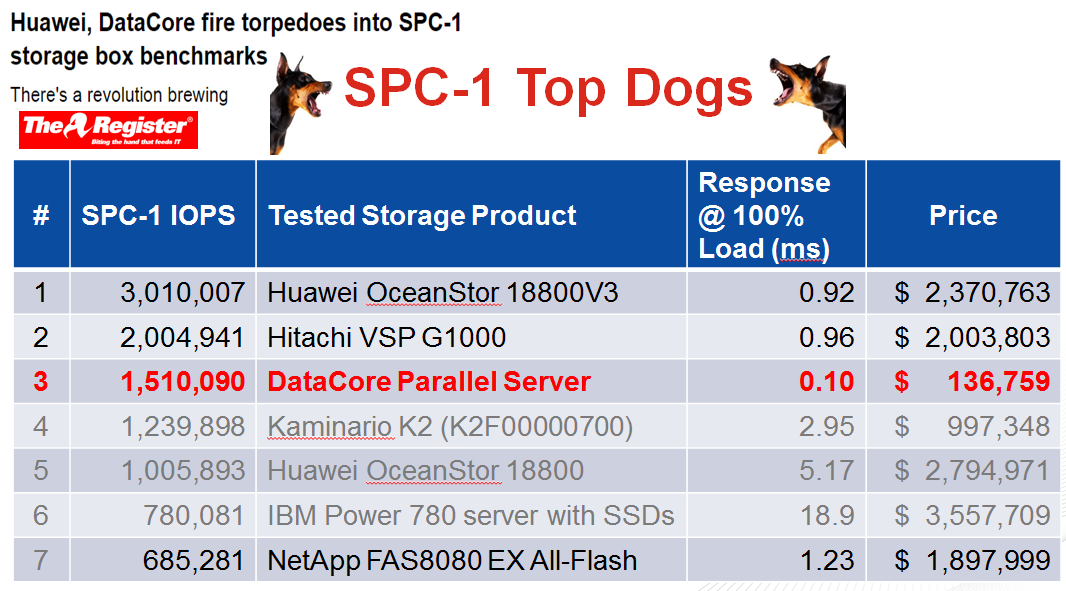 DataCore announced that its second SPC-1 result has catapulted the company into third place among the SPC’s Top 10 of absolute performers while achieving the best price-performance and fastest response times among those Top 10. DataCore again leapfrogged the field and now holds the top two positions in the SPC-1 Price-Performance™ category1. The DataCore™ Parallel Server software at the heart of the hyperconverged configuration delivered 1,510,090.52 SPC-1 IOPS™2. Notably, the number one and two systems3 n the category are very large footprint multimillion dollar systems that are 14 times more costly than the compact 4U-sized DataCore based solution.

“There is no magic in what we are doing,” state Ziya Aral, Chairman of DataCore Software. “Yes, we use a standard 2U server, but it is a server with 36 cores and 72 logical CPUs. At 2.5 GHz clock speed that multiplies out to the equivalent of 180 GHz, provided only that we use those CPUs concurrently. Even if the CPUs don’t scale perfectly, we have an ’embarrassment of riches’ in compute power. If they scaled at only 60%—and they do much better than that—we effectively have access to over 100 GHz of CPU power. Frankly, we would have been disappointed if we hadn’t been able to put up these kinds of I/O numbers with a 100 GHz CPU.”

DataCore’s initial results showcasing the power of parallel I/O were first published in late 2015. The new results, which tripled the previous performance achievements, were attained on the same server platform hardware to demonstrate the potential and the pace of advancement possible from the company’s new software and parallel I/O architecture. And, there is more to come.

The 1,510,090.52 SPC-1 IOPS™ were attained with the total cost for hardware, software and three years of support totaling $136,758.88. This yielded the SPC-1 Price-Performance™ result of $0.09 per SPC-1 IOPS™, which is more than eight times lower than all of the top performing high-end systems that have achieved over one million SPC-1 IOPS™4.

The DataCore Parallel Server configuration placed third overall in SPC-1 IOPS™ behind two systems costing over $2 million. Only the Huawei OceanStor 18800V3 at a total price of $2,370,760 and the Hitachi VSP G1000 system at $2,003,803 had higher SPC-1 IOPS™ numbers than the $136,759 solution from DataCore. Unlike those two storage systems, which only provide external SAN functions, the DataCore Parallel Server also ran the computational enterprise-class database and OLTP workloads inside the same compact package.

Most remarkably, the DataCore configuration delivered the fastest SPC-1 response time ever recorded (100 Microseconds at 100% load), besting all systems, including multi-million dollar systems and all-flash arrays, by seven times or more. From a real estate standpoint, the entire system takes up only 4U (seven vertical inches for a 2U server and 2U for disks) of standard 19″ rack space. In stark contrast, other systems reaching the million SPC-1 IOPS™ mark occupy multiple 42U cabinets consuming considerably more data center space, power, and cooling.

“Essentially the only major difference between our first and second SPC-1 results was our software,” notes Ziya Aral, who continued by answering the obvious question: how is that possible? “The truth is that the hardware platform matters, multiprocessing matters, and I/O craft matters, but what matters most of all is software architecture. DataCore was designed from the outset for parallel architectures…but the definition of ‘parallel’ at the time was 4, 8, maybe 12 CPUs. Today, we are running in standard platforms with 72, 144 or even 288 logical CPU cores, and that will double with the next few ticks of the clock—because Moore’s law now advances in multiples.”

Aral explains further, “Parallel Server is designed to take advantage of that evolution in computer architectures—not just for the present but into the future. This software inverts our previous understanding: what was once a precious commodity now exists in surplus and the software must take advantage of it.”

DataCore Parallel Server is a software product that transforms standard servers into parallel servers targeted for applications where extremely high IOPS and low latency are the primary requirements. DataCore’s parallel I/O technology executes many independent I/O streams simultaneously across multiple CPU cores, significantly reducing the latency to service and process I/Os. This technology removes the serialized I/O limitations and bottlenecks that restrict the number of virtual machines (VMs), virtual desktops (VDI) and application workloads that can be consolidated on a server or a hyperconverged platform—and instead enables them to process far more work per server and significantly accelerate I/O-intensive applications.

DataCore Parallel Server software is now available to DataCore OEM partners and is currently being evaluated by server and system vendors. General availability is planned for Q2 2016.

The practical significance and business advantages of DataCore Parallel Server’s record-breaking results can be appreciated from several perspectives:

About the Storage Performance Council

The Storage Performance Council (SPC) is a vendor-neutral standards body focused on the storage industry. The SPC created the first industry-standard performance benchmark targeted at the needs and concerns of the storage industry. From component level evaluation to the measurement of complete distributed storage systems, the SPC benchmark portfolio provides independently audited, rigorous and reliable measures of performance, price-performance and power consumption.