Jon Toigo explores the renewed interest in software-defined and hyper-converged storage, and an important partnership between Huawei and DataCore Software.
http://searchstorage.techtarget.com/opinion/Huawei-DataCore-A-new-hyper-converged-infrastructure?
“It’s stunning how the server vendor landscape has shifted from HP and IBM over the last couple of years. Now Lenovo and Huawei have become the third and fourth largest providers of servers by volume, and relatively new players like Cisco UCS have made significant gains in market share.”
Like many storage aficionados, I have been watching the industry and trade press discussions of software-defined storage and more recently, hyper-converged infrastructure, with considerable interest. But, like most storage folks I know, I tend to greet most product announcements in this space with a cynical shrug.
It’s not that the evangelism around both software-defined and hyper-converged hasn’t resonated: at their core, in my opinion, the software-defined and hyper-converged advocates are advancing a long overdue question about the wisdom of deploying proprietary storage arrays with value-add storage software services embedded on their controllers.
True SANs could have rectified the problems of “isolated islands of storage” a decade or two ago if vendors had wedded the scale-out serial SCSI fabric interconnect with technologies for virtualizing all of the connected devices. This shared pool of capacity could establish a centralized software-based controller to manage the whole thing. When DataCore Software advanced this approach 17 years ago, it found itself summarily shouted down by the storage hardware vendors.
With all of the renewed interest in the problems and inefficiencies of traditional storage, and the need for a new software-defined or hyper-converged model, you would think that DataCore would be on top of the market. However, the concept of hyper-converged was hijacked out of the gate by hardware vendors, who saw it as a way to glue together commodity servers with commodity storage rigs to create storage appliances that I would argue are not that much different from the monolithic storage they had been selling for decades.
On the heels of hyper-converged appliances came the hyper-convergence models from server hypervisor vendors. The pitch sounded great: dismiss the hardware guys, deploy generic servers to host hypervisor software and deploy multi-node servers-plus-flash-plus-direct-attached JBODs (just a bunch of disk storage arrays), and put Virtual SAN software on each server “head.” A minimum of three nodes were required for high availability, at a combined hardware/software license cost in the neighborhood of $10- to $30,000 per node – placing the solution outside the budgetary reach of IT planners supporting the needs of smaller firms and remote office/branch office environments. To those who are old enough to remember, the whole idea was reminiscent of the IBM mainframe data center of the late 1970s and early 1980s, with the hypervisor software vendor seeking to play the role of the dominant vendor that controls all aspects of the compute infrastructure.
Bottom line: between the proprietary appliance sellers and the proprietary hypervisor vendor server/storage stacks, hyper-converged looked like the same dog as so-called legacy storage, only with different fleas. Hence, my cynicism.
New partnerships show potential for hyper-converged 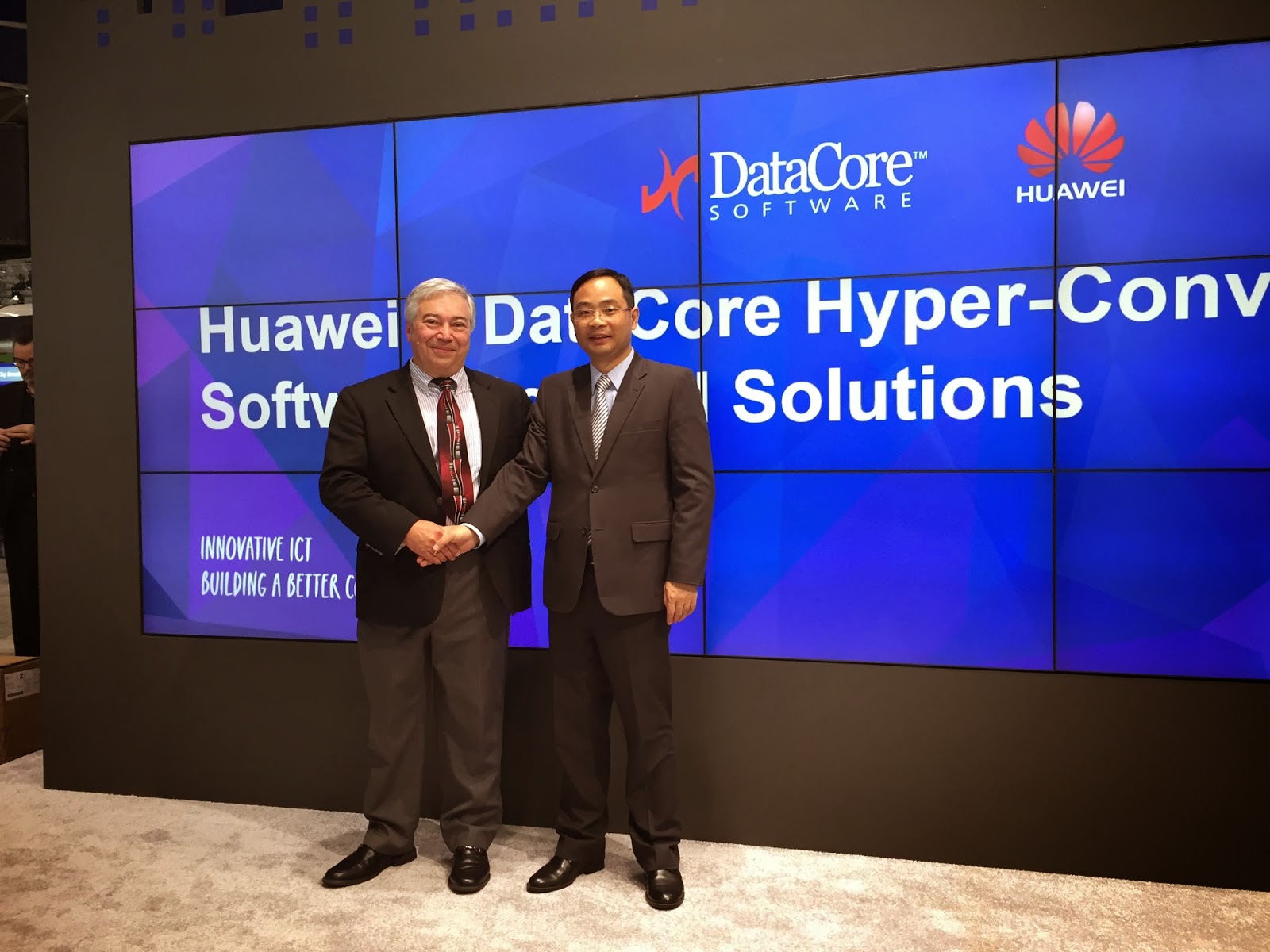 However, a more interesting story has begun to take shape around hyper-converged that was highlighted again this week with the announcement of a global partnership between DataCore Software and Huawei, a global information and communications technology provider. The agreement aims to deliver hyper-converged solutions based on Huawei hardware and DataCore Software’s virtual SAN software. Huawei, while not the dominant market leader in servers or storage, is growing faster than its peers, according to Gartner, especially in Asian and European markets. The decision of the company to leverage hypervisor and hardware-agnostic hyper-converged infrastructure software from DataCore represents a smart break with the relationships that some leading server vendors have made with VMware or Microsoft directly.
DataCore has been quietly chalking up multiple partners for itssoftware-based hyper-converged infrastructure solution. It’s stunning how the server vendor landscape has shifted from HP and IBM over the last couple of y
ears. Now Lenovo and Huawei have become the third and fourth largest providers of servers by volume, and relatively new players like Cisco UCS have made significant gains in market share. Interestingly, Cisco UCS, Fujitsu, and Dell (now the second largest provider) have all announced partnerships with the Ft. Lauderdale, FL-based storage virtualization software firm. The Huawei agreement, announced on March 17 at CeBit, suggests that DataCore is delivering on its promises with server vendors. Were DataCore to lock down an agreement with HP– which needs a lift– or with Lenovo’s server business — which needs to fill the IBM storage gap –it might well become a household name.
Of course, DataCore’s hyper-convergence partnership strategy isn’t unique.Dell sells Nutanix hyper-converged software on PowerEdge servers. Cisco has certified SimpliVity’s software and ASIC that handles services such as data deduplication to run on UCS servers. Maxta, a software-only hyper-convergence vendor, supports a wide range of hardware partners. And VMware also has a bunch of partners for its Virtual SAN (VSAN) software, including Dell, HP, EMC, and NetApp.
From a vendor perspective, the benefits of working with a “non-aligned” (that is, not beholden to any specific server hypervisor) hyper-converged infrastructure software provider is clear. They can leverage their breadth of server offerings and support their customers with cost-effective virtual SAN storage regardless of which hypervisor the customer is using –or, in a growing number of cases — the multiple hypervisors that the customer is using. The hypervisor software companies tend only to provide storage for workloads that have been virtualized using that hypervisor software, to the exclusion of competitor stacks. This will become less and less viable if survey data materializes in the real world and between 30-40% of firms diversify their server hypervisor choices.
While Huawei and DataCore clearly are targeting larger enterprise accounts, they have created a much lower barrier to entry. DataCore brings to the relationship the ability to penetrate remote offices, departmental computing within larger enterprises and, more importantly, smaller accounts that have been largely abandoned by the big hypervisor vendors. Rather than requiring a minimum of three storage nodes, or requiring that firms abandon all current “legacy” storage investments or mandating an investment in new flash storage technology, DataCore enables HA server/storage clusters with only two nodes, and can leverage most legacy storage capacity and both DRAM and flash devices. They provide the proverbial Swiss Army Knife solution for virtual SANs and it may help hardware vendor partners move more gear. Over time this will likely become a stronger message than the “one throat to choke” benefit touted by server hypervisor vendors who want to sell hyper-converged as part of their server virtualization software.
The uptake of the “DataCore-inside” solutions remains to be seen. There is merit to the idea that the ultimate success or failure of the strategy will rely not on the relationships with brand-name server vendors, but with those solution vendors and integrators who intelligently provide flexibility in how servers, software, and storage are integrated to deliver a solution now. Time will tell.