Back in March I wrote about VMware’s conviction that 2011 is the year when desktop virtualization gets real, and Jon Toigo’s assertion that the big roadblock for a Virtual Desktop Infrastructure is the cost of the storage needed. Our partner Pano Logic found a related one: high availability. How they cleared this roadblock and boosted performance at the same time is a good illustration of how DataCore’s SANsymphony-V storage hypervisor works as a team player to solve virtualization problems. 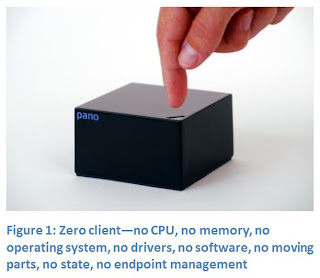 Pano Logic offers a Zero Client Computing desktop virtualization infrastructure for VMware, Microsoft Hyper-V, Citrix XenDesktop, and other hypervisors. Figure 1 shows the Pano Logic endpoint: just attach a keyboard, one or two monitors, and a mouse, connect to a back-end server running the Pano Logic software, and up comes your desktop.

Of course, that assumes you have a back-end infrastructure to connect to, and the expertise to configure and run it. Pano Logic found that for many customers, such as small businesses and even enterprise branch offices and departments, this wasn’t a given. So the company packaged up a complete virtual desktop infrastructure, from servers to endpoints, and offered it as Pano Express. All the user has to do is unpack some boxes, follow the color-coded instructions, and push a button. It’s easier than most home theater setups.

Pano Express, which supports up to thirty users, is a hit, especially in the SMB and educational markets. But the company found that enterprise branch office and departmental customers more often demanded 100% 24X7 operation as well. Downtime would have serious financial consequences.

Pano Logic knew that storage virtualization was the key to high availability. Storage is the heart of a VDI. In fact, Toigo describes a virtual desktop as the ability to “call a desktop image up on demand, do some work, and then park it back on disk.” If your storage is highly-available, your virtual desktops are as well. That’s one role of a storage hypervisor, whether built into a SAN or furnished as software for heterogeneous storage infrastructures.

SANsymphony-V’s synchronous replication capabilities can unite any combination of disk storage devices into a single virtual storage pool maintained across two active mirrored servers. If either half of the storage infrastructure is taken down for maintenance or fails, the other server picks up the load without any user impact. Resynchronization is automatic, non-disruptive, and requires no special host scripts.

This is just one example of how DataCore’s storage hypervisor is helping a growing number of partners solve specific virtualization problems and deliver greater value to their customers. In future posts, I’ll share more such stories, to illustrate the wide range of benefits available from storage virtualization delivered by a software solution that works with any storage hardware.