Virtualisation should be 3D: DataCore 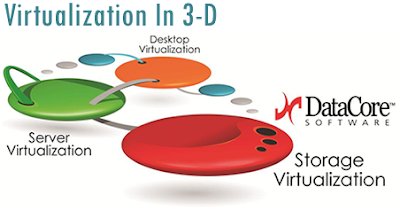 Virtualization should be 3D: DataCore
http://www.itworldcanada.com/news/virtualization-should-be-3d-datacore/140005-pg1

Storage technology vendor DataCore Software Corp. is touting a three-dimensional approach to virtualization that encourages organizations to address server, desktop and storage concurrently from the outset when building a virtualized environment.

Augie Gonzalez, director of product marketing with the Fort Lauderdale, Fla.-based company, said focusing on just server and desktop at the beginning while neglecting storage will lead to negative consequences in the long run.

“Leaving out any one of those dimensions creates shortcomings and obstacles for that customer downstream,” said Gonzalez.

The number of dependencies on the storage infrastructure are magnified with server and desktop virtualization, said Gonzales. Specifically, performance bottlenecks occur when desktops and servers are consolidated and an increased number of inputs and outputs are driven against the storage pool, he explained.

Gonzalez said problems encountered down the road due to bad planning are one reason IT departments hesitate to move Tier 1 workloads to a virtual environment. “As soon as they scale out to actually meet the workload demand, that’s when they hit upon it … and that’s when people start to rethink whether they were doing the right thing by virtualizing,” said Gonzales.

According to Dave Pearson, senior analyst for storage at Toronto-based IDC Canada Ltd., storage virtualization is a relatively new, albeit key, component of virtualization. But he said the storage component is still a “support” technology led in most cases by server virtualization.

Pearson said storage virtualization forms part of what he calls “virtualization 3.0,” where it’s not just about getting rid of physical machines and improving processes anymore. “It’s now part of optimizing the entire solution, making sure you’re really getting your money’s worth out of the hardware that you’re committing to these virtualization projects,” he said.

However, while Pearson agrees storage is a vital component of an organization’s virtualization strategy, he said such a 3D approach is hardly a novel idea to IT pros involved in large virtualization projects.

The 3D approach is “just really another tool that’s being added to the box of tools for virtualization,” said Pearson. Besides DataCore, Fremont, Calif.-based 3PAR Inc., among others, is in the market.

DataCore is relying on its community of resellers to evangelize this 3D virtualization approach because, according to Gonzales, customers still require a lot of education on the topic.

Gonzales said the “second phase of adoption” of virtualization to areas like business continuity, risk mitigation and disaster recovery, is beginning to shine a spotlight on storage. “All of those many machines and many users and many virtual workloads now become so centred on how the storage environment behaves and how well that virtual view of storage remains intact as you move through generations of hardware,” he said.

Pearson said storage virtualization is growing more quickly in importance than server virtualization, but not at the same level overall.

ACW Insights: How to add value to your virtual environments

Virtualization should be 3D: DataCore