“Two major surprises jump out at you from the findings,” said Deni Connor, founding analyst, SSG-NOW. “The absence of near term spending on Big Data and Object Storage among the majority of respondents, and the relatively small penetration of flash across these 477 organizations. Not surprising are the rising levels of investments on software-defined storage initiatitives known to offer more immediate payoff.”

In contrast, more than half of organizations polled (52 percent) look to extend the life of existing storage assets and future-proof their IT infrastructure with SDS in 2015

DataCore has released the results of its fifth annual State of Software-Defined Storage (SDS) survey. The 2015 poll explored the impact of SDS on organizations across the globe, and distills the experiences of 477 IT professionals currently using or evaluating SDS to solve critical data storage challenges. The results yield surprising insights from a cross-section of industries over a wide range of workloads.
The survey also probed for levels of spending on much-hyped topics, including Big Data, Object Storage and OpenStack. Unexpectedly, the findings showed that very little funding is being earmarked in 2015 for these initiatives. Some of the pause may be explained by a number of disillusionments that were disclosed in the findings. 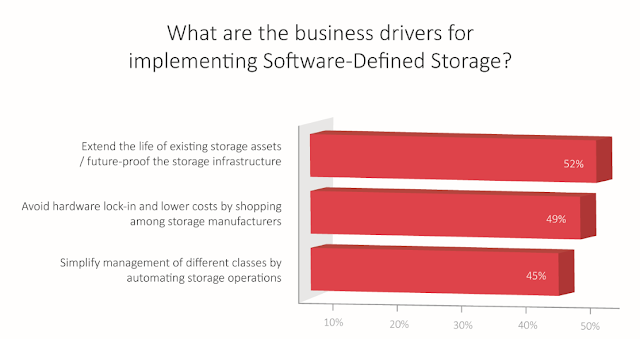 On the other hand, this year’s report reveals several major business drivers for implementing Software-Defined Storage. 52 percent of respondents expect SDS will extend the life of existing storage assets and future-proof their storage infrastructure, enabling them to easily absorb new technologies. Close to half of respondents look to SDS to avoid hardware lock-in from storage manufacturers, while lowering hardware costs by allowing them to shop among several competing suppliers. Operationally, they see SDS simplifying management of different classes of storage by automating frequent or complex operations. This is notable in comparison with earlier surveys, as these results portray a sharp increase in the recognition of the economic benefits generated by SDS (reduced CAPEX), complementing the OPEX savings referenced in prior years.

Other surprises include: while flash technology penetration expanded it is still absent in 28 percent of the cases and 16 percent reported that it did not meet application acceleration expectations. Also interesting is that 21 percent reported that highly touted hyper-converged systems did not perform as required or did not integrate well within their infrastructure. On the other hand, Software-Defined Storage and storage virtualization are deemed very urgent now, with 72 percent of organizations making important investments in these technologies throughout 2015. 81 percent also expect similar levels of spending on Software-Defined Storage technologies that will be incorporated within server SANs / virtual SANs and converged storage solutions.

Additional highlights of DataCore’s 2015 State of Software-Defined Storage survey include:

“This survey sheds new light on how IT professionals approach storage-related innovations. The data reveals that many organizations are moving away from storage functions tied to specific hardware and are deriving real CAPEX and OPEX savings and additional purchasing power by not being locked to particular hardware or being forced to go ‘all new buys’ to modernize their storage infrastructure. It also points out that heavily promoted technologies, such as Object Storage, are more often found at the fringes in pilot programs, where IT is hoping to assess their value,” said George Teixeira, president and CEO at DataCore. “Software-Defined Storage and storage virtualization software, in contrast, are providing the features that the market is demanding right now, such as continuous availability, faster performance and higher efficiency. These concrete benefits carry far more weight in 2015 spending than future promises from yet to be proven technologies and startups.” 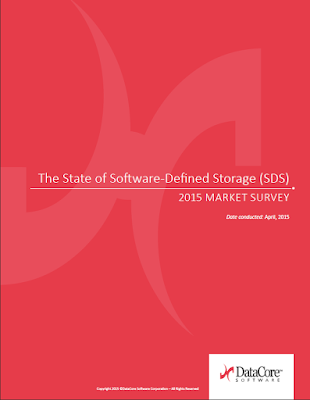