Join Us at KubeCon + CloudNativeCon Europe 2022, May 16–20
Search
Get Started
Languages
3 min read

Garry Carpenter, Solutions Architect, DataCore UK, delivers 3 takeaways for those considering running Critical Apps and Databases on Hyperconverged systems:
Hyperconvergence has today emerged as a rightful contender to rein in former data centre expansion madness.  It’s growth has been so dramatic and influential of late that Gartner has opened the doors to its growing market dominance, re-alligning infrastructure segmentation with a new category, the 2018 Gartner Magic Quadrant for Hyperconverged.
Easy to plot market growth and popularity when you also consider that the use case for hyperconvergence has dramatically expanded from the original VDI intention cited five years ago. To give you a snapshot of current use case expansion, last week we ran a quick social media poll with the results mirroring the use cases that we are seeing on the ground for hyperconverged adoption. In our poll results below, remote sites and branch offices remain an obvious winner for virtual SANs. VDI remains strong too, allowing admins to logically assign more horsepower as VDI users grow. But, today trust has grown to such an extent that we see the fastest growing use case coming from logical infrastructure consolidation (68%), and stopping the data centre sprawl. 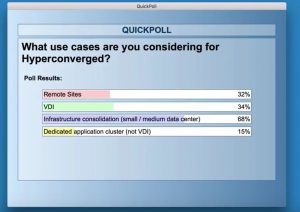 So has maturity for hyperconverged now reached such a threshold that you can now realistically and credibly stretch it to run your Tier 1 apps and databases? Our local poll illustrated just 15% are currently considering this as a use case. But consider had we run the same poll the same time last year, we predict less than 2% would have had this vision. So why are databases now emerging as a contender for hosting in a hyperconverged infrastructure (HCI)?
Traditionally the primary challenge that critical apps and databases pose in a hyperconverged environment is that of restricted I/O and bottlenecks when you scale up and maximise hyperconverged nodes to meet Tier 1 demands for performance and processing.
Can you overcome this threshold? In short, yes, but it takes a niche, focused approach and only DataCore within Gartner’s Magic Quadrant on Hyperconverged is a vendor identified that offers a technology called Parallel IO that allows hyperconverged environments unparalleled ability to leverage all available I/O horsepower across all nodes to process demanding transactions. In essence, because Parallel I/O enables users to process multiple I/Os in tandem or parallel, they are no longer hampered by the speed of slowest serial transaction.
On the ground, the effect of hyperconvergence running tier one apps is that users can make underlying use of the hardware in just a two node configuration, with geographically dispersed, synchronously mirrored clusters with a single node in each location.
To see if hyperconverged could lower your overheads and increase process performance and productivity to meet your digital transformation needs, consider if the following benefits would be applicable to you and then request a 15 minute live demo and as your local Solutions Architects, we would be happy to show you how.
3 Consideration Takeaways of Parallel I/O within demanding Hyperconverged Environments. Question if you need :-
1.       Far more efficient nodes in the hyperconverged cluster that can service the most demanding apps
2.       A need for far fewer  hyperconverged nodes to reduce complexity and cost
3.       Extreme database performance gained via Parallel I/O and validated by the independent SPC results that documents Parallel I/O as having the lowest latency in milliseconds (by a factor of 3 compared to the No 2 rival)

Garry Carp
enter is a Senior Solutions Architect at DataCore Software with over 25 years of experience in the storage industry. When Garry is not doing his day job, he can be found in his workshop, tinkering with one of his many cars and motorcycles. Or, at the track with his family run race car.