Just imagine the impact of any delay in getting emergency responders to act on a 911 call for help. Could it mean more damage to a property? Could it cause serious injury, or even loss of life?

That’s a risk a 911 call center in Medford, Oregon, wasn’t willing to take.

Multiple times a day, Emergency Communications of Southern Oregon’s (ECSO) main call dispatch application suffered from slow response times, causing unacceptable delays in sending out emergency responders. ECSO’s application was built on a Microsoft SQL Server database, and root cause analysis showed that the underlying storage system was hitting 200-millisecond latencies throughout the day. So, they decided to update their infrastructure.

Originally, ECSO was going to just refresh their storage system, even though it was still under maintenance, but when they got the price quote, they realized it would blow their budget. It was time to look for alternatives.

After considering various hyperconverged solutions, ECSO IT Manager Corey Nelson decided that the DataCore Hyperconverged Virtual SAN (HVSAN) was the only product that could meet all of his technology and business objectives. With HVSAN, Nelson realized that in addition to improving response time, they could also meet other key requirements, gaining high availability, remote replication, and an overall more robust storage infrastructure at the same time. 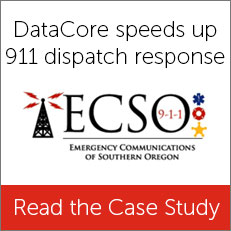 Instead of having multiple servers connecting to a single storage device, with hyperconverged, the storage tier was collapsed into the server tier, so a storage device wouldn’t be a single point of failure. But the question of performance of their SQL database remained. They did a proof of concept, putting the DataCore HVSAN through its paces, and what they found surprised them.

The HVSAN deployment increased performance by a factor of 20x. In fact, the deployment was so powerful, they realized they could even reduce the number of nodes.

So, with DataCore HVSAN, they were able to increase the responsiveness of their call dispatch application, increase availability of their infrastructure, and reduce costs, both capex and opex.

And because of that one decision, we fixed our storage performance issues and we upgraded our entire infrastructure, all within the budget.

“It was at that very moment that I thought—it fits our price range and it gives us a way to use our existing storage,” said Nelson. “And because of that one decision, we fixed our storage performance issues and we upgraded our entire infrastructure, all within the budget we wanted to spend in just a single year—rather than having to spread out purchases to multiple years.”