Container technology is one that could be mistaken as being overhyped. As an industry, we have been talking about containers for over a decade. It has taken a long time for the technology to mature, for the market to understand its value, and for organizations to test and deploy applications on containers.

This year, however, containers are real. We have seen adoption numbers that show the technology has moved from ‘interesting’ to ‘deployed broadly in production’. Let me share a few data points:

Complexity is the Biggest Challenge for Container Technology Adoption

Containers, Kubernetes, and all the associated technologies are still new for most organizations. There is not an available pool of talent to draw from. Many aspects like scalability, monitoring, security, persistent storage, and availability require new thinking and new tools. As with any emerging market with great potential, there are many alternatives to choose from and many architectural decisions to make.

All this results in complexity being the top challenge for organizations running container-based applications. Complexity is ahead of cultural changes, security, and storage as you can see in the chart below from the Cloud Native Computing Foundation (CNCF) survey.

Another way to look at complexity is as a skill shortage. A recent article shared the results of a survey by Canonical where over 50% of the more than one thousand responses cited lack of in-house skills as the biggest challenge to using Kubernetes and containers.

OpenEBS is an open-source project, designed to simplify the deployment of stateful workloads in Kubernetes that require reliable and fast container-attached storage (CAS), an approach that offers a few key benefits:

OpenEBS was released as version 1.0 in mid-2018. Soon after that, it became a CNCF project. The CNCF is the community organism that supports projects like Kubernetes, fluentd, containerd,  vitess, etcd, helm, jaeger, Prometheus, and many others. Being a CNCF project is a guarantee of governance for the project by the community.

Some of the advantages of OpenEBS include automated provisioning and cross-cloud stateful application storage, backups, support for multiple engines and storage modes to give each application the optimal capabilities. With version 3.0, released in September OpenEBS is a stable platform with enhanced usability, synchronous replication, performance improvements, improved dashboard, and a dynamic NFS provisioner.

All this has resulted in OpenEBS becoming the de-facto standard for container storage. The community’s adoption and contributions have made OpenEBS one of the fastest-growing open-source projects ever, as you can see in the chart below that compares pulls (downloads) for the first four years after launch relative to MongoDB and Confluent. 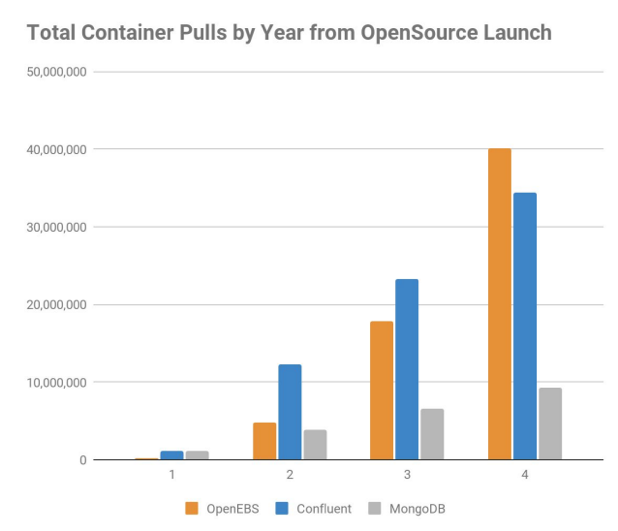 The same CNCF survey referenced before shows OpenEBS and MayaData (the company behind OpenEBS) leading ahead of other CAS alternatives, just behind hyperscaler platforms and standard interfaces like Container Storage Interface (CSI). If we were to combine the responses for MayaData and OpenEBS,  you can see around 65% of users using OpenEBS/MayaData in production. 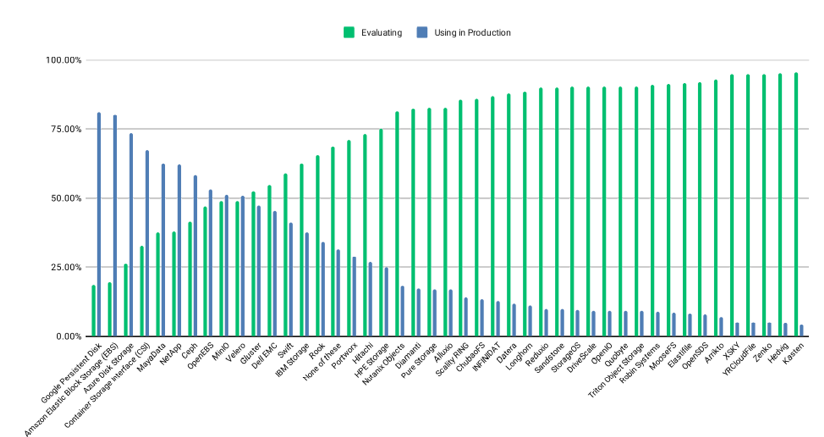 Another informal survey, a little over a year ago, by @kubernauts on Twitter, showed 49% of users were using OpenEBS, far ahead of Rook, StorageOS, and Portworx. 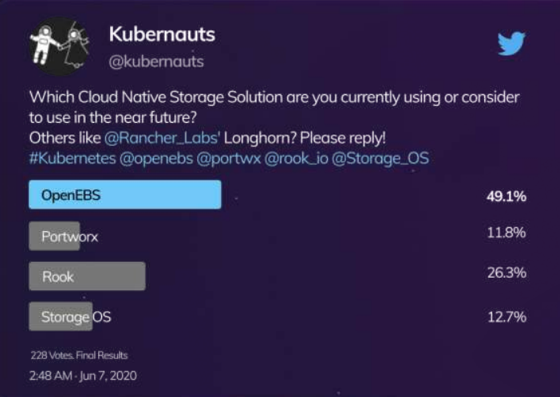 MayaData, the Company Behind OpenEBS

All of this would not have been possible without MayaData, the main contributor to OpenEBS, and all the hard work by their entire team including Kieran Mova, their chief architect. For the last four years, they have been dedicated to fostering a community and making OpenEBS a successful project.

Three years ago, we recognized containers were going to be mainstream in the future and decided to invest in building a container solution. In January of last year, DataCore and MayaData formed a joint partnership that included investment, contribution of IP, transferring our container team, and collaboration. At the time, we realized the market was forming and we had a higher chance of success by partnering with a company that had the momentum and was already actively participating in the community.

An example of this partnership is the use of DataCore’s legendary performance expertise, in partnership with Intel, to optimize the performance of OpenEBS with NVMe drives. The result can be observed in the benchmark chart below, which shows the performance advantage better than a thousand words could. 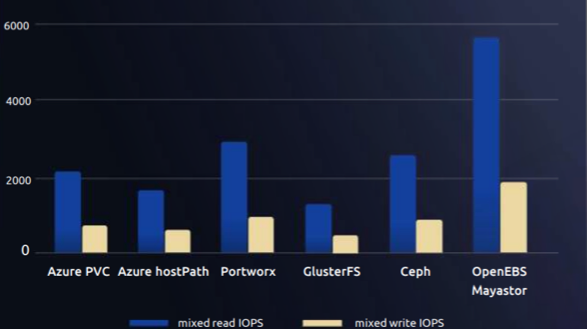 Today, given the traction of OpenEBS and the maturity of containers, DataCore is acquiring MayaData. The acquisition signals the need to accelerate MayaData technology into a serious commercial offering from a vendor that can provide the support, resources, and expertise to drive adoption for enterprise workloads – while continuing a strong commitment to the community.

Now that containers have reached the tipping point, organizations deploying real workloads on Kubernetes will look for solutions that not only have solid technical merits, but also provide the confidence and the support they need to make a commitment to the technology.

DataCore will provide that assurance of stability, technical support, and the confidence of working with a leading company in storage technology. In addition, MayaData will continue to be enhanced in capabilities such as performance (Intel claims MayaData is already the fastest container storage available –this article from Blocks & Files has more details), portability, simplicity, availability, data security, etc.

This Industry Snapshot analysis from The Evaluator Group provides more context about today’s news, including the roadmap looking forward and how this fits into the industry at large.

There are not many fundamental shifts in technology as what we are witnessing with containers today. For those of us who have had an opportunity to work with containers, it is evident they will play a major role in the fabric of how workloads run in the future. It is exciting to witness this evolution and to be able to play a role in it.

This is day one of DataCore + MayaData as a single company. But we have already been working on an improved roadmap and a plan to make OpenEBS even more successful. At the same time, we will continue to improve the container capabilities in the rest of the portfolio by updating the CSI interface and building more container-native capabilities.

In the coming months, we will be sharing more details about the new MayaData offering by DataCore, and we hope to work with you on this journey.